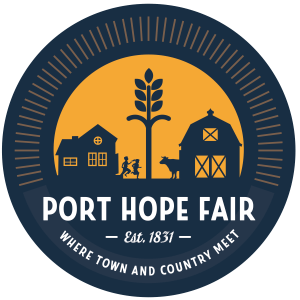 The reconstruction of the original main gate entrance along with a number of special events being hosted at this year’s Fair is to commemorate the 225th anniversary of the first harvest of wheat in Hope Township (now the Municipality of Port Hope) on the north shore of Lake Ontario (1794-2019) which according to old newspaper articles, seems to also be the first wheat harvest on the entire north shore of Lake Ontario between what is now known as Burlington and Belleville.  The 225th Wheat Harvest is an important historical event because it celebrates the anniversary of the land in early Ontario yielding wheat crops, and the early history of Ontario Agriculture.

Early Settlers planted wheat seed between the tree stumps and that Fall they harvested the wheat by hand.  As their second winter was approaching and they had too much grist to pound by hand, they needed to travel to a mill which had a large grinding stone.  They had no sailing ship or boat of any kind, and there were no roads, just paths through the forest.  As soon as the ground froze solid enough, Myndert Harris and the other strongest men packed the grist in cloth bags, then waterproof deerskins and loaded them onto sleds they made themselves by lashing together felled trees.  the sleds were pulled by oxen while the men walked, since there were no horses in the early days.  They walked through the winter days to the closest mill which was at Meyer’s Creek (Moira River, now Belleville) approximately 52 miles (84 km) away.  Within a month the men returned to great rejoicing over the precious flour and their safe return.   Descendants of the Harris, Stevens and Haskill pioneers still live in Port Hope and descendants of the Mississauga Ojibway families live in Alderville, Curve Lake, Hiawatha and the New Credit Nation.

The following special events are taking place at this year’s Fair to commemorate this historic time:

225th Wheat Harvest Tent  in the South Field – Inside Demonstrators

1 p.m. –      Hope Agricultural Heritage Club – planting and harvesting of wheat including tools, equipment used and how it has evolved over the years

Displays and Presenters will also be available throughout the day.

12:45 p.m.- Hope Agricultural Heritage Club – planting and harvesting of wheat including tools, equipment used and how it has evolved over the years

Displays and Presenters will also be available throughout the day.

Musical Performances on the outdoor stage by the Fall Fair Centre 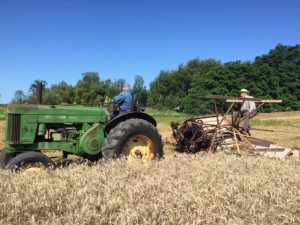 Hope Agricultural Heritage Club members in a wheat field using an old binder which cuts the wheat and bundles the stocks in to sheafs which was taken at their annual Machinery show in August 2019. Wheat Sheafs were then loaded on a wagon and will be brought to the 2019 Port Hope Fair for the Wheat Threshing demonstration.